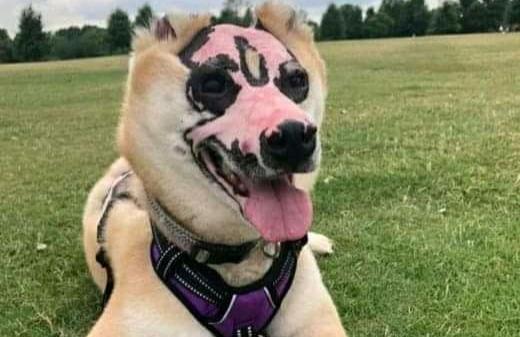 A picture of fire survival Dog is going viral on social media. It is told that “the Dog who survived fire became a Therapy Dog For Burn Victims.”

People are appreciating the dog and sharing very good thoughts and blessings to the dog.

This news is about 4 year old. On Oct. 23, 2018, a fire broke out in Georgia. Family somehow managed to get out children from the house but it was late to get in again for dog. The whole house burnt. Dog somehow able to jump neighbor’s house. The dog badly burnt. The neighbors panicked and reached out to Crystal Lesley, a veterinarian at Care More Animal Hospital on Facebook.

“When I saw the picture I immediately called her and told her she needed to bring him to me!” Lesley says. “She was able to get some help and they brought him in. He was still smoking when they found him. We had never encountered a burn victim as severe as Taka before and we were terrified that he wouldn’t make it.”

The condition of the dog was very bad. That time Taka (dog) need a specialist to get cure. People helped the dog with donating money. Lesley left work and drove him to the South Carolina Veterinary Specialists and Emergency Care in Columbia, South Carolina.

Taka was in unbearable pain. People who love dog can’t see him in such condition. Lesley gave her lot efforts. Taka has been in hospital for one and half month. After hospital Lesley has to daily bandage changes and wound care. One more thing came to know that Taka couldn’t blink.

One of the nurses at the Joseph M. Still Burn Center fell in love with Taka’s story and soon, the center called offering to do skin grafts and reconstructive surgery on him to allow him to blink — all at no charge!

All became so happy after listening this news.

A a nurse at the burn center approached Taka coming in to visit burned children, in hopes of giving them something to relate to.

Lesley has been with Taka for a long time and she understands Taka well and liked the idea.

For this Taka needed training and after he received Therapy Dog certification. He passed the CGC test which is known as one of the most difficult test. This way he became Therapist.

The Reason Behind Elephant Bath With Dust