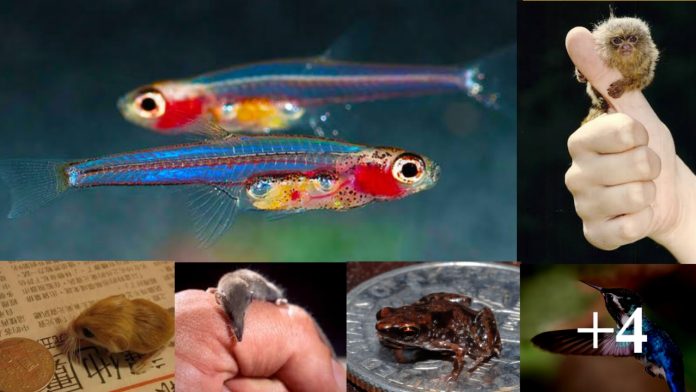 Have you ever heard of the smallest animals out there? the smallest animals on Earth come in a variety of shapes and sizes, from tiny insects and worms, to minuscule crustaceans and mollusks. Many of these tiny creatures are so small that they can only be seen with the aid of a microscope. But here we are talking about the animals. Insects are invertebrates – they don’t have a backbone and animals are vertebrate with a backbone. Despite their size, these animals play important roles in their ecosystems, serving as food for larger animals, pollinators, and seed dispersers. Tiny monkey, fishes, turtle, small snake, birds, and small frogs are few example of smallest animal on earth . Instead of directly talking about the species name we gave the common example so you can understand it easily. These animals are fascinating to study, as they possess unique adaptations that allow them to survive in their environments.

10 Smallest Animals on the Earth

Pedophryne amauensis is a species of frog that is native to Papua New Gui nea. It is notable for being the smallest known vertebrate in the world, with adult individuals reaching an average size of just 7.7 mm in length. It was discovered in 2009 by scientists from the Museum of Comparative Zoology at Harvard University and the Louisiana State University Museum of Natural Science. Paedophryne amauensis is a part of the genus Paedophryne, which contains the smallest frogs in the world. They live in leaf-litter of lowland rainforests, and their diet consists mostly of small arthropods.

Paedocypris progenetica is a species of fish and this smallest fish species on the Earth, with adult specimens typically measuring 7.9 millimeters in length. This is second smallest animal in our list. It is a member of the cyprinid family, which also includes common species such as carp and goldfish. P. progenetica is found in swamps and peat bogs in the island of Sumatra, Indonesia. The species is known for its highly reduced or tiny eyes, and its minuscule body size, making it one of the smallest vertebrates known to science. This fish is listed as critically endangered in the IUCN redlist and it is one of the most threatened fish species in the world.

The Kitti’s hog-nosed bat (Craseonycteris thonglongyai), also known as the bumblebee bat, is a smallest bat species found in Thailand and Myanmar. This is smallest mammal in the world, with a body length of about 29-33 mm (1.14-1.3 inches) and a wingspan of about 170 mm (6.7 inches). It weighs about 2 grams. The fur on its back is dark brown or black and the fur on its belly is a lighter brown. It is named for its hog-like snout, which is longer than its head.

This bat species lives in caves and mostly feeds on insects (eg – mosquitoes and moths etc.) It is considered to be an endangered species due to habitat loss and hunting. The population of these bats is low and the known roosts are few.

The Baluchistan pygmy jerboa (Salpingotus michaelis) is a small rodent found in the Baluchistan province of Pakistan and in neighboring regions of Iran and Afghanistan. It belongs to the family Dipodidae and is known for its small size, with a body length of only 4-5 centimeters and a tail length of 7-8 centimeters. The species is nocturnal and lives in arid, rocky habitats. It feeds on seeds and insects, and is adapted to survive in its harsh environment through burrowing and conserving water. It’s considered as a rare species and data is limited on its population and habitat range

The Etruscan shrew (Suncus etruscus) is a small mammal which is species of family Soricidae. It is native to Italy and parts of southern Europe, and is one of the smallest mammals in the world. The size is average length about 3.5 centimeters and a weight around 2 grams. Etruscan shrews have dark brown fur and a long, pointed snout. They are active animal and they feed on many insects and other small invertebrates, as well as some plant material.

The bee hummingbird (Mellisuga helenae) is a smallest hummingbird species. It is found in the island of Cuba and the Isla de la Juventud in the West Indies. It is the smallest known bird species, measuring 6.1 cm (2.4 inches) in length and weighing 1.95 grams. The bee hummingbird is beautiful bird & can be identified easily. The color of this bird is green, blue to red. Its beat wings very fast, which can reach 80 beats per second. It feeds primarily on nectar and small insects.

Speckled Padloper Tortoise is commonly known as Speckled Cape Tortoise. It is the smallest known tortoise species. It is native to the Western Cape region of South Africa. The size of an adult tortoise is about 4-7 inches in length. Speckled Padloper Tortoise is known for its unique, speckled pattern on its shell. It can vary widely in color and pattern from individual to individual. It has a high degree of genetic variation and is considered a conservation dependent species.

Madame Berthe’s mouse lemur (Microcebus berthae) is a species of mouse lemur. It is one of the smallest primates in the world, with a body length of about 8-9 centimeters (3-3.5 inches) and a weight of around 30 grams. It is named after Madame Berthe Rakotosamimanana, a Malagasy woman who first collected a specimen of the species in 1992.

The mouse lemur is primarily active at night and feeds on insects, fruits and nectar. They are found in dry and spiny forests. Due to habitat loss and hunting, their population is decreasing and they are classified as “Critically Endangered” by the IUCN.

Slender blind snakes, also known as thread snakes or worm snakes, are a group of small, burrowing snakes found in tropical regions around the world. They are characterized by their small size, typically measuring only a few inches in length, and their lack of visible eyes. They have a slender, cylindrical body and a pointed snout that they use to burrow through soil and leaf litter. Their diet consists mainly of ants and termites, which they locate using their sense of smell. They are non-venomous and harmless to humans.

Pygmy marmosets are the smallest species of monkey in the world, measuring only about 5 inches in length (not including the tail, which can be up to double the body length). They are found in the rainforests of South America, primarily in the Amazon Basin. They are arboreal, meaning they live in trees, and they have long claws on their fingers and toes which they use to cling to branches.

Can Wild Animal be Overweight