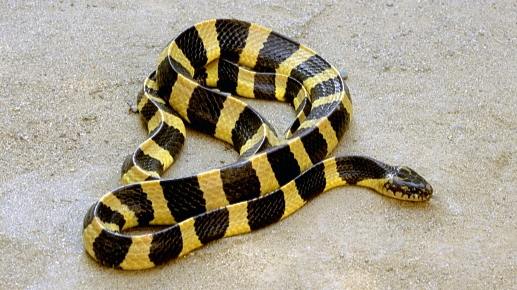 There are over 3000 snake species found in the world. Some snakes are aquatic, some are terrestrial and some live on trees. Snakes are common reptile creature but snakes are two types some are venomous and some are non-venomous means if a snake bite you and that snake is venomous then you could die if you don’t get treatment on time. It depends on the snake and how poisonous is that every snake has a different type of venom. Some snakes’ venom is acute so you need to rush toward the hospital as soon as possible after the bite because if you don’t get treatment on time you will surely die.

Yellow Snake with Black Stripes could be Krait, Mangrove Snake or Indian Rat Snake (Dhaman). these are most popular yellow snakes with black stripes.

That doesn’t mean every snake is venomous. Some snakes are non-venomous that mean if they bite you, you can face some health problem but you won’t die.

One thing to keep in mind is that snakes are not that much aggressive that they will immediately attack you because they are not interested in attacking you but if you play with them then they might bite you so stay away from them if you are not a snake expert.

(2) Neurotoxic – this type of venom attack the nervous system.

(3) Cytotoxic – this type of venom attack the cardiac system.

It is a little bit complicated to decide yellow snake with black spots or a black snake with yellow spots but I hope these snakes are the query you are searching for.

There are many species found of Krait but all species aren’t yellow with black spots. This snake is a Bungarus genus snake. It is found in the Asia region mainly in India and also nearest countries like Shri Lanka, Bangladesh, & Pakistan, etc. It ranges between 1.0 – 1.5 meters but it can grow up to 2 meters. This snake is known as one of the most venomous snakes and its venom type is Neurotoxic. This snake is also known as a banded Krait. This snake is a triangular-shaped snake and its body has black and yellow stripes.

This snake looks like Krait because it has similar look but one main different thing about this snake is it look like yellow stripes on a black snake. The ventral surface of this snake is yellow-colored. Its original name is Boiga dendrophila. It is also known as a gold-ringed cat snake. It is range from 1.5 – 2 meter in length. It is found in Cambodia, Indonesia, Malaysia, Myanmar, the Philippines, Singapore, Thailand, and Vietnam. According to Wikipedia, it needs to chew to release the venom and its venom is weak also its mouth is not wide enough to sink the fangs into a human leg or arm [read here]. This snake eats small mammals, birds, and reptiles.

There are many species of Rat snake but the Indian yellow rat snake looks a little bit similar to your query. Its tail region has black stripes on its yellow body. The black stripes don’t found in all body but in the tail region, we can see small black stripes. This snake is commonly known as Dhaman. It ranges from 2.5 – 3 meters but also it can grow up to 3.6 meters. It is a non-venomous snake and doesn’t bite until you harm or play with them. These snakes generally live in forest and farm areas but sometimes in search of food (generally mice) they come to the human resident.

These are the most common and well-known black striped yellow snakes. Out of these three snakes, two snakes were found in the Indian region. Krait is a highly venomous black stripe on a yellow body snake.

Q.1 Is Krait Venomous?
Ans:- Yes! Krait is a highly venomous snake and it is a Neurotoxic snake.

Are snakes carnivores? What do Carnivores Snakes eat?

What would have happened if Titanoboa was still alive

The Truth Behind The Existence Of Nag Mani (Naja Stone)